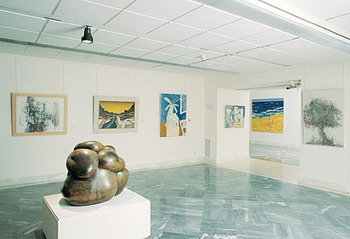 On the 28th of July 1979 the Basil and Elise Goulandris Foundation inaugurated the Museum of Contemporary Art in Hora, capital of Andros and birthplace of Basil P. Goulandris. The initial reason for the construction of the museum (total floor area of 200m2, architect: Stamos Papadakis, civil engineer: Paris Fragoulis, supervision: Pantelis Karadontis) was to exhibit the collection of works by Andros native sculptor, Michael Tombros, which he bequeathed to his native island. The exhibits were further enriched by part of the personal collection of the two founders, Basil and Elise Goulandris Foundation.

The positive reception of this effort as well as the increasing attendance and interest on behalf of the public led to the expansion of the museum. The New Wing of the Museum of Contemporary Art is situated opposite the old wing and was inaugurated on the 20th of July 1986 (total floor area of 1000m2 architect: Christos Kontovounisios, civil engineer: Paris Fragoulis, supervision: Pantelis Karadontis). The two founders wished to establish a small contemporary art museum which would be designed and outfitted to meet the latest museum standards with a view to house international exhibitions.

The exterior areas and the garden were designed by Miranda Spiliotopoulou-Vazaka, based on the principle of respecting the natural and architectural environment of the area while creating a work of art with an active role.  The construction materials were mostly marble and stone in colors that coincide with the colors used throughout the island. The architectural integration of the building with its surroundings attained (received) a distinction in the competition “The International Garden and Greenery Exposition” in Osaka, Japan in 1990 and was featured in Contemporary Landscapes of the World, Process architecture Co., Ltd, Tokyo, Japan, 1990, pp. 102-105)

The main objective of the museum is to continue to actively contribute its own creative proposals to the current debates on the visual arts aligned with the international trends and developments in visual arts and aesthetic education, to promote Greek and international modern and contemporary art to the general public.