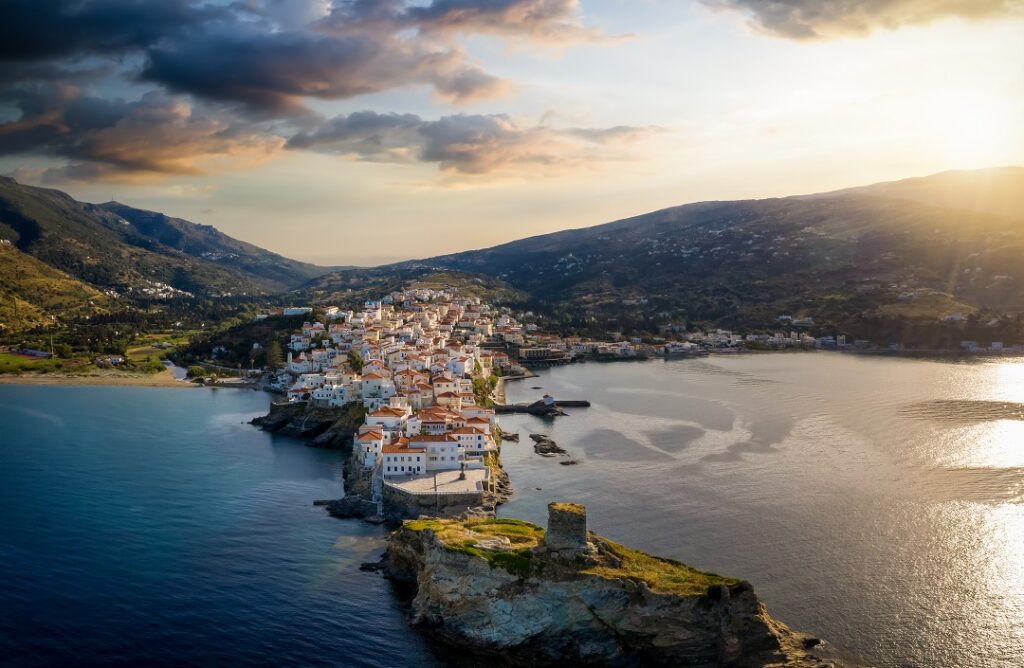 Chora is the capital of Andros and one of the most beautiful spots on the island. The combination of neoclassical mansions and Cycladic buildings is truly enchanting. The narrow alleys, the stone pavements, the museums, and the sea give a unique atmosphere. Chora, Andros is built on a small peninsula of the island, in the center of its eastern coastline, between the two long sandy beaches, Neiborio and Paraporti.

Chora of Andros has a truly unique beauty due to the combination of Byzantine, Frankish, and Ottoman architecture. The gate of the old town has been preserved and gives the visitor the feeling of entering another world, another era. The medieval atmosphere with the modern one of the town coexists and complements each other in perfect harmony.

Moreover, Chora has two squares: the first one is made of large slabs and is surrounded by many cafés, small restaurants, and pastry shops. The enchanting ensemble is completed by a huge plane tree, which provides shade. The second square is paved with beautiful marble, and there is the famous statue “Afanis Naftis“. The capital of the island is also the cause of Andros’ artistic fame, as there are many important museums there, which are visited by crowds of tourists every year.

Chora is located 35 km east of the port (Gavrio) and is close to some beautiful and picturesque villages. Such is Messaria, a lovely medieval village, and also Menites, Stenies, and Apikia, where the famous Sariza spring is located.

The name of the island probably comes from the general Andros from Crete. The use of the name “Ydrousa” is also common because of the island’s springs. Archaeological excavations in Andros prove the existence of developed settlements from Mycenaean times or even earlier, showing the importance of the island in the Cycladic culture. The capital of Andros in ancient times was Paleopolis. It is an extremely fertile and green place with beautiful springs and streams.

Around 1800, Andros, like many islands in Greece, turned into huge a shipping economy. The economic and social development was tremendous. As a consequence, Chora of Andros, being the commercial and economic center of the island, grew and its settlements increased. Mansions and neoclassical houses were built by shipowners and their relatives, but also by donations from wealthy families. Such were Empirikos Nursing Home and Hospital. In 1901, the Agora pedestrian street was built by the mayor Georgios Empeirikos, which is still the main commercial street of the island’s capital.

Neiborio, apart from being the main beach of Chora of Andros, is also one of the most popular beaches on the entire island. Since the old days, it was a common choice, as it was very easily accessible. For the same reason, even today, it is a great choice for families. In addition, its sandy beach and shallow waters make it very friendly to all people.

Paraporti has a very long sandy beach and many tamarisk trees that provide shade. The waters of the beach are wavy, giving excellent conditions for water sports lovers. On the beach you will also find a beach bar, to cool off and enjoy the view of the sea and the lighthouse Tourlitis.

Syneti beach is also an excellent choice. It is also one of the favorite beaches of the locals. It is about 7 kilometers from Andros Town and is just below the village that shares its name.

Finally, Piso Gialia is also worth a visit. Its crystal clear waters are sure to impress even the most discerning. Also, its seabed is magical and rich in life. Its access is easy and it is located in the village of Stenies.

“Afanis Naftis” is a trademark of the great history of Andros. Most importantly, it is a symbol of its maritime history. In fact, “Afanis Naftis” is a tribute to those sailors who perished in the fury of the sea. The statue was built on the spot where the old mansions of Chora were found and bombed by the Germans in 1943. “Afanis Naftis” was created by the sculptor Michael Tombros using copper as the basic material.

“Afanis Naftis” remained invincible by time and weather until April 30, 2001. Then an extremely strong and aggressive wind hit him with fury, knocking him down. But with care and the necessary repairs, he was put back in place. Since then it continues to be an important tourist attraction and a real gem that adorns Chora of Andros.

The capital of Andros also has a significant number of museums. Among others, worthy of mention is the Archaeological Museum of Andros. Also the Museum of Contemporary Art and the Maritime Museum.

The Archaeological Museum was founded in 1981 and houses the important collection of the Geometric settlement of Zagora. Among its most important exhibits is a very well-preserved copy of the map of Rigas Feraios.

The Museum of Contemporary Art was inaugurated two years earlier, in 1979. Its aim is to make a practical contribution to contemporary artistic concerns.

Finally, the Maritime Museum of Andros was founded in 1972. The exhibits take the visitor on a journey through the history of Andros’ merchant shipping since 1750, revealing the island’s great history. Naval records, nautical diaries, and historical photographs are just some of it’s great exhibits.