Toggle Search
Find all the museums in Andros and information about them.

It was founded in 1981 by a donation of the Basil & Elise Goulandris Foundation, with by the design of Stamos Papadakis. It has findings from excavations in Andros.

It is housed in the old ice-cream factory of Mantzavelaki, at the entrance of Chora, at Paradise Hotel. It presents exhibits from the life of Andros and copies of Christian art. Institution has become the Lemon Feast on the Easter Big Saturday and the Festival of Wine, Cheese and Bread Bread on Andrew on the eve of the Holy Spirit.

Nearly 3,000 volumes from Theofilos Kairis private collection and 85,000 books in total are here.

The Kydonieos Foundation was founded in 1994 by Petros and Marika Kydonieos. It is housed in a lovely house, an architectural example of the interwar period.

kydoniefs@hol.gr
Sights and Attractions in Andros

Its exhibits reveal the rich history of the shipping of Andros, with charters, contracts, maritime events calendar and diaries, lithographs, photographs and models of Andriot ships.

On the 28th of July 1979 the Basil and Elise Goulandris Foundation inaugurated the Museum of Contemporary Art in Hora, capital of Andros and birthplace of Basil P. Goulandris.

www.moca-andros.gr
Sights and Attractions in Andros

The most important exhibits are the marble lion, the marble statuette of Artemis and the marble plaque with the unique hymn in Greece in honor of the goddess Isis.

Cyclades Olive Museum As we realize how much our life and culture are associated with the olive tree as well as its products and the techniques and methods of olive oil production evolve, the more necessary is – especially in a time of rapid change – the preservation and the emergence of traditional, animal-powered olive mills. The majority of them, however, ceased to function since the late 1960s. From the well-preserved old, animal-powered mills of Andros, we got the “screw” of Dimitris Helmi in Ano Pitrophos. The building dates back to 1823. It was restored and turned into a museum area, where visitors of all ages allowed to see it. The museum gives the possibility to approach culturally valuable product but also be familiar with the old and traditional techniques of production. The museum’s building with its equipment is an excellent example of rural heritage, pre-industrial technology and architectural heritage.

www.musioelias.gr
Sights and Attractions in Andros 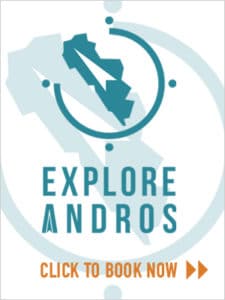 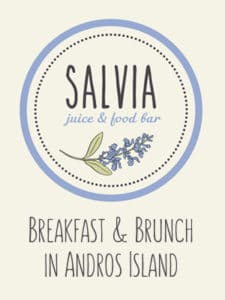