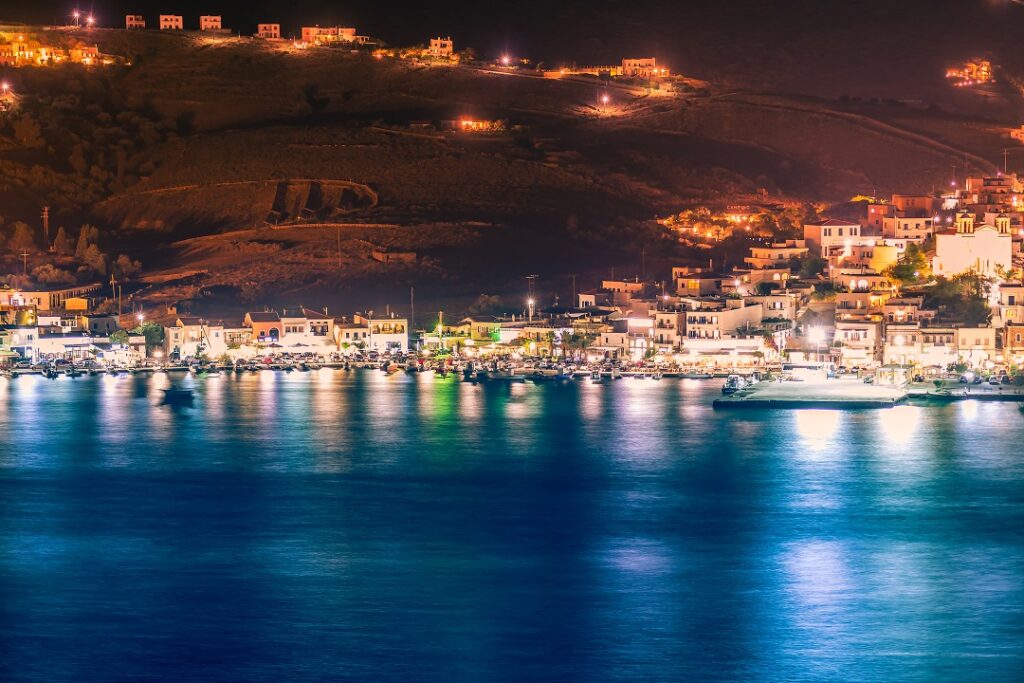 Gavrio is the main port of Andros, is located on its west coast, and is the only point that connects the island with Rafina. It is 32 km away from Chora and 45 km away from Korthi. Until the 90s it was a traditional fishing village, but then it slowly started to develop its tourist side. However, its first significant development came at the end of the 1960s. In that year it started to be the main port of Andros, due to its location. Near Gavrio are the islets known as Gavionisia.

Restaurants, tavernas, bars, cafeterias, hotels, camping sites, rooms to let, tourist offices, car, and motorcycle rental agencies, and many other shops welcome the traveler as soon as he arrives on the island. The main settlement of Gavrio, however, has kept its picturesqueness, especially when the traffic in the port calms down.

Gavrio is also the starting point for excursions to the north of the island in search of beaches and villages. To the south of Gavrio, there are some golden sandy beaches as well as the imposing tower of Agios Petros. Near the area is also the Monastery of Zoodochos Pigi and many beautiful sandy beaches, like Fellos, Agios Petros, Chryssi Akti, Agios Kyprianos, and Kypri.

Very close to the port of Gavrio is the small settlement of Harakas. In recent years this village has been developing rapidly, which is also due to its location. Just five kilometers away is Fellos (Epano & Kato Fellos). It is surrounded by the very beautiful, homonymous sea and has very beautiful houses. It is even considered an excellent fishing spot. Above Gavrio, is the so-called Ano Gavrio and Koumari, famous for their magnificent views.

A little further away and north of the port of Andros you will find Amolochos. It is a mountainous village located in the north of the island, at an altitude of 360 m. There are several theories about the name of the area, but Molocha, an herb that occurs in the area, seems to prevail. Of course, we cannot forget Agios Petros, a well-known village of Andros, with its beautiful beach. The village is built on a hill and offers a unique view of the entire plain. In addition, near Gavrio you will find Vitali, a mountain village with many crops and a fantastic beach.

Surrounded by Harakas beach, Gavrio is definitely an amazing resort. Just 3 km away from it you can find two of the most beautiful beaches on the island. Chryssi Ammos and Agios Petros.

Chryssi Ammos is one of the most organized beaches of Andros. It attracts hundreds of holidaymakers every day. Thanks to the characteristic golden color of its sand, it is very famous. Agios Petros is undoubtedly the largest beach on the island and is very reminiscent of Chryssi Ammos. At the same time, however, it is very cosmopolitan due to its huge size. For the same reason, people who do not want crowds chose to visit Agios Petros.

In Gavrio you will also find many taverns, bars, and tourist shops. It also has important attractions such as the well-preserved, cylindrical tower of Agios Petros. The Giannouli Tower on the dunes, a 17th-18th century building, has its own tragic love story. Also, there is the Fountain of Mouria, which, according to the inscription, was built in 1882 with the sacrifice of Leonidas D. Karakitsos.

Mikrogiali, in the northeast of the island near the village of Varidi, is a cape surrounded by steep cliffs. Vryokastro, on the other hand, is located on the top of the mountain in the western part of Zorkos. It still has traces of the fortifications. In Kastri, parts of the ancient walls built by Alcibiades during his exile in Andros are still preserved.

Finally, the castle “Ostodosia” or the tower of Makrotantalos was built by Venetians. It is a classic example of defensive architecture and has many similarities with the Kato Kastro in Chora of Andros. Makrotantalos although it is much smaller in size. It is located at the northwestern end of the island, specifically on the rocky edge of the beach of Pyrgos.