Andros is a unique island in the Cyclades

Andros is 2 hours away from Athens and is the second largest island in the Cyclades. Andros differs greatly from the islands you already know. It has an area of 380 sq.Km. It is 6 nautical miles from Evia (narrow Kafirea, Kavo D’Oro) and less than a nautical mile from Tinos. The island is about 40km long, width 17km and is approximately 36 nautical miles from Rafina with which it is connected by ferry. The coastline of Andros is rocky with a total length of approximately 176km and according to Andreas Embirikos, Andros Island is “the dazzling queen of the Aegean… the most beautiful of all the world.”

Andros retains the only lighthouse in Europe built on a rock. The Tourlite in the capital of Andros, Chora

The island is a miniature of Greece

Andros and its morphology 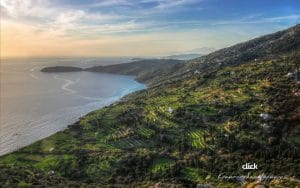 Andros is a miniature of Greece, it has high mountains, many ravines, small rivers, valleys planted with vines, running water, cypress, oak trees, fruit-bearing trees, olives, hot springs. The island has rich geographical contrasts which combine the dry Cycladic landscape with rich vegetation and abundant waters. The main mountains of the island are Agios Saranda (715m), Kouvaras with its highest peak, Petalos (996m), Gerakonas (736m) and Rachi (681m). The island, especially in the winter months, has a large number of rivers and streams. The most important are Achla, which comes from Petalos and flows to Achla Beach, the Arnipotamos, which flows into the bay of Lefka, the Great River of Livadia, which flows into Paraporti. Significant streams are the Dipotamata and Lourion.

Andros of the running waters Pithara is a magical place in Andros

Andros of the sea

Andros and its coastline with its crystal clear waters

The coastline of Andros is generally rocky except for the deep bay of Gavrio. The most impressive cape are Kambanos at the northern end of the island, Artemide, Gria, Akamatis, Kato Kosmos, Steno, Agios Sostis and Peristeri on the west coast. Andros has a mild climate, with winds usually dominating almost every season. The wind, apart from the sea, is a strong element of the island. The location has the highest annual rainfall in the Cyclades, which is rich in surface and groundwater. Higher temperatures on the island occur in times when there is no wind. The winds blow mainly from NW and northern directions, weakened to the west coast (Batsi – Gavrio). They start in May with slight intensity and duration, blowing more intense in August and weakening in October.

Andros of the fauna

Andros has many shelters and food for many bird species: owls, nightingales, partridges, woodcocks, turtledoves, carderines. Also rare predators like the short-toed eagle, the peregrine falcon and the Falco Eleonorae, a dark-haired, medium-sized hawk with long wings. The Falco Eleonorae is one of the most endangered species in Europe, with half of its world’s population living in the Aegean. The island is in the path of Falco Eleonorae to which it comes and is reproduced. Then it migrates to spend the winter in distant Madagascar. In the dense vegetation of the island, many small animals find shelter. Ferrets, badgers, wild rabbits, hedgehogs, hares and snakes: Efios (Dolichophis caspius), Fournofaisa (water snake), Balkan whip snake (Hierophis gemonensis), the Viper (the only poisonous). Also many terrapins, gecko, frogs, toads. 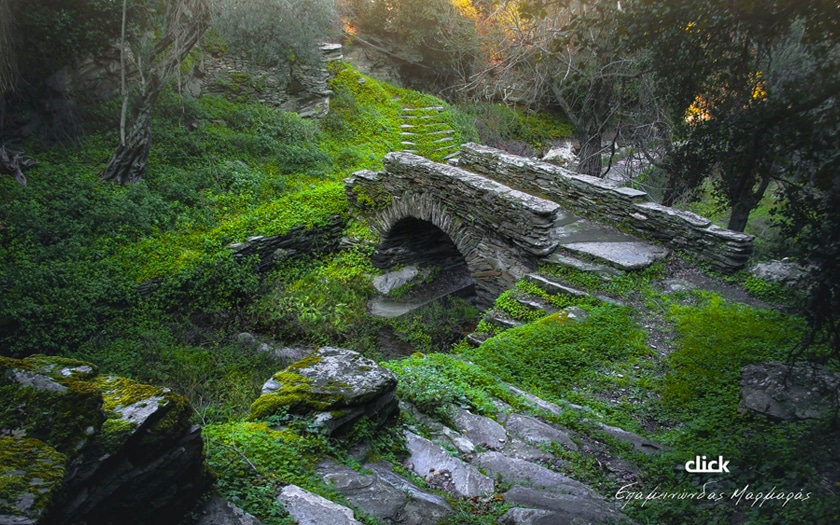 The Bridge of Love at the Episkopio in Andros, known from the film Little England

Andros of the flora

Andros | The 4 central points of the island

Chora | The capital of the island

The old town in Chora, Andros

Chora, it’s the capital city of Andros and it is located in the northeastern part of the island. It is built on a small peninsula that seems to “cut” the sea in two. The peninsula from the main road that crosses the Chora leads to Afani Nafti Square and the sea. It ends up on the small island, on which is built the medieval Venetian castle, as well as the rocky island of the famous and unique Turlitis Lighthouse. Chora is surrounded by two sandy beaches, the main beach of the capital the Neimporio in the west and the Paraporti in the east … Read more

Gavrio | The gate of the island 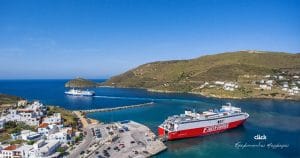 The port of Gavrio, the gate of Andros.

Andros has as a main Port the Gavrio. The island’s gate is built in the middle of the windless natural bay on the northwest side of the island. It is 32 km away from Chora and 45 km from Korthi. To the north of it, there are many beautiful and picturesque villages like Amolochos, Ano & Kato Fellos, Sidontas, Makrotantalo, Chartes, Varidi, Kalivari and some of the most beautiful beaches on the island like Vitali, Zorgkos, Vlichada. Gavrio has many tourist accommodations, hotels, taverns, cafes, bars. 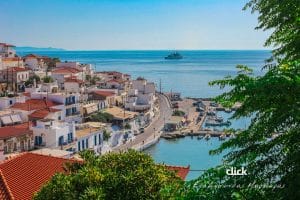 View from the harbour in Batsi

Built by the sea, with many hotels, bars, taverns and lively nightlife. The windless beach with the fine sand it is fully organized and is a great solution for families and lovers of water sports. The blue lines of the horizon and the shrubby green make up an image that easily points to images of carefree and summer happiness. It is no coincidence that the tourism development of the island started from here.

View of the Bay of Korthi

Ormos Korthiou or Gialos for the rest of Andros is located in the southern part of the island, between the mountains of Gerakonas and Rachi. The settlement is flanked uniquely by the view of most of the surrounding villages. In the area dominates the castle of Faneromeni (Pano Castro). About swimming is offered the long beach (Milos), as well as the windless harbour of Agia Aikaterini and behind the hill, the famous beach of “tis Grias to Pidima”. 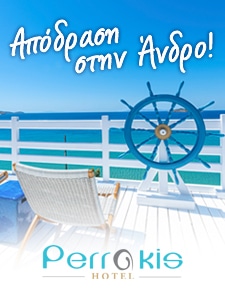