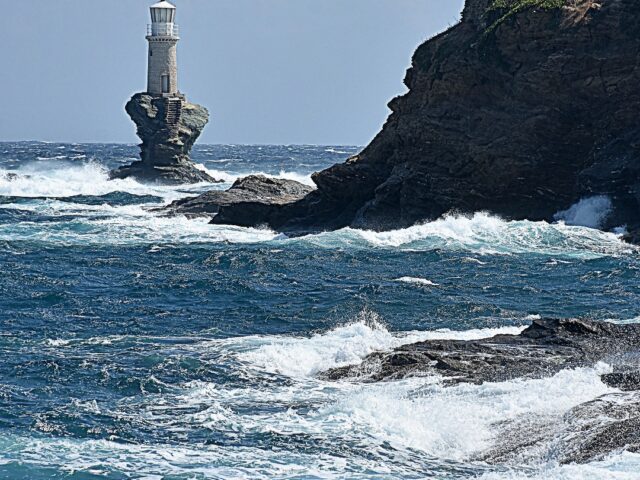 On one of the most beautiful islands of the Aegean, Andros, a lighthouse emerges from the water, the famous Tourlitis. It is certainly one of the most important sights on the island. The lighthouse of Andros, Tourlitis, has been illuminating for more than 120 years and provides safety to all ships. This picturesque and impressive structure is literally in the sea, perched on a rock, creating a truly magnificent sight.

It is one of the few lighthouses in Europe that are literally in the sea. Every day, it fights the waves, illuminating the Aegean Sea. Tourlitis was built in 1887. However, it was commissioned 10 years later, on 1 January 1897. It has a height of 7 meters and a focal height of 36 meters and it is visible at a very long distance of up to 11 nautical miles, showing its light every day. Tourlitis was built at a time when the island had already become an important center of Greek shipping. It contributed significantly to its further prosperity.

Tourlitis, the beautiful lighthouse of Andros

During World War II, Tourlitis was destroyed due to bombing. A monument that withstood the merciless blows of nature and the waves could not withstand the human paranoia and hatred. This tragic war, apart from death and poverty, caused the destruction of the lighthouse of Andros, which for many years illuminated the Aegean and the “soul” of the Cyclades. The Tourlite was not restored until 1994. That year, however, the towering lighthouse of Andros showed that it would continue to give its light to all incoming ships. The Goulandris family, one of the most prominent families on the island, financed its reconstruction. The lighthouse of Andros was raised again, after almost 60 years. In fact, with its reconstruction, it also became the first automated lighthouse in Greece. The existence of a guard was therefore no longer necessary for its operation.

Andros – The center of Greek shipping

After the Greek Revolution, many refugees from the surrounding rebellious islands arrived in Andros. Refugees from Psara, a Greek superpower in shipping and trade, relocated to Andros. In Andros, they generously gave their knowledge and experience. As a result, Andros quickly became a powerful naval center, along with the decline of other traditional centers of Greek shipping, such as Galaxidi and Hydra. The Andriots very quickly managed to become rich and well known as merchants and captains throughout Central and Eastern Europe.

During the 20th century, Andros, despite the devastation and wounds left behind by the First and Second World Wars, was characterized by an impressive euphoria in its economy and naval dominance. At the beginning of the 20th century, the Andriot shipowner Dimitris Moraitis inaugurated the Greece-North America sea route. In 1939, Andros was second in the number of ships, after Piraeus. In the late 1950s, a large wave of immigration began. This was directed toward the large urban centers of Athens and Piraeus. Many Andriots also headed abroad, mainly to the USA.