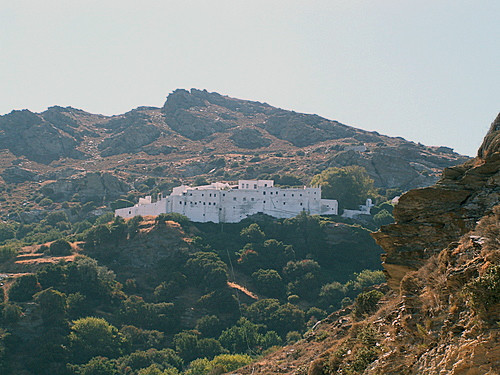 The holy Monastery of Panahrantos, is situated on the northern slope of Mount Gerakones, in the place of Katafygio. It is It is surrounded by huge rocks, sculpted by the air over the centuries, creating caves, the largest of which were also used as a hermitage. The view is dizzying. It gives you the feeling that you are hanging over the gap. All the villages of central Andros and Chora are in front of you. The monastery is accessible from the village of Vouni, which the easiest way to reach this village is from the village of Fallika. Inside the monastery notice the two very beautiful post-Byzantine wood carvings, the temple and the entrance door of the narthex. After returning from a victorious battle against Cretans and fulfilling a vow, Nikiforos Fokas, left a lot of money in Andros. With this money the monks built the first buildings of the monastery. The miraculous icon of the Virgin Mary, a work Evangelist Luke according to the facts, is kept in there. However, because there is also there, the sull and the bones or Agios Panteleimonas, the monastery celebrates in July 27th in his memory and on the 15th of August of course for the icon of Mother Mary.

You can get there by an asphalt road from the village of Vouni. Also, by a dirt road from village Fallika and by paths from Fallika, Livadia, Vrachno.