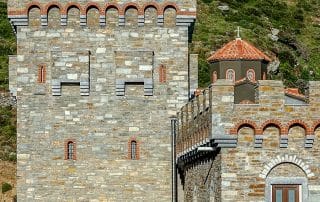 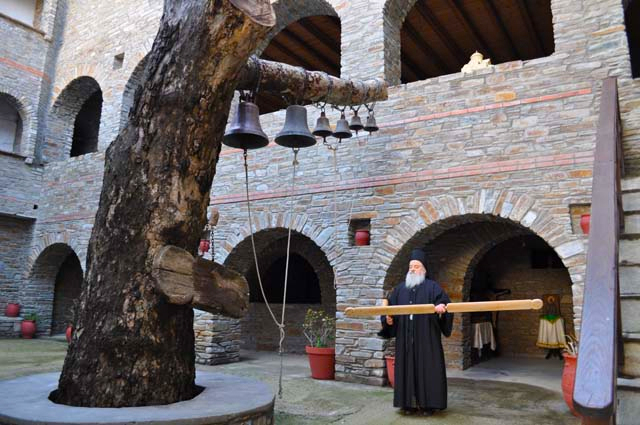 The Monastery of Agia Marina in Andros is located in the area of the village of Apikia and is dedicated to the Great Martyr of the 3rd century AD. It is said to have been founded in 1325 AD by an ascetic elder to whom Agia Marina miraculously appeared.

The Monastery of Agia Marina in Andros after its foundation went through several difficulties. In the 16th century, it was burned 3 times during pirate raids resulting in a decline. Only 5 elderly monks live in the monastery in 1743. Then, Jerome Sophronios experiences visions and miracles that urge him to sell all the property he owned in the Peloponnese and go to the Monastery. Turns the Monastery into a nunnery in 1746. Almost 150 years later, in 1883, with the issuance of a decree of the Bavarian regents, the Monastery of Agia Marina was forced to close and turned into a stable. The image is put up for auction and is saved by the Empirikou family.

In 1975, Metropolitan Dorotheos, seeing the ruins of the Monastery, urges his deacon, a former Mount Athos monk Kyprianos, to restore it. Kyprianos refuses, but the same night Agia Marina appears in a vision. The Saint tells him that she and her sisters must return to the Monastery. This was enough for the restoration of the Monastery to begin the next day.

All that remains is for the icon to return to its ‘home’. Kyprianos, making a great effort, managed to transfer the icon from Andros Town to the Monastery in 1976. After a vision, he located the holy water that Agia Marina told him about in his sleep. For decades, many miracles have taken place. The Holy Monastery of Agia Marina with its holy water and miraculous image gathers many Christians mainly from Cyprus due to a miracle that happened years ago to a child from there. It is one of the most important pilgrimages in Greece. Finally, it celebrates on July 17,