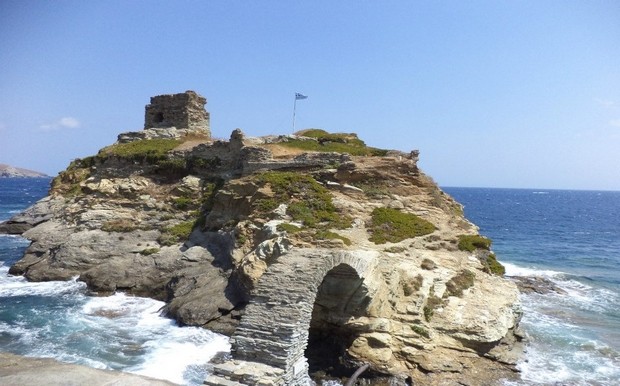 Kato Kastro in Andros is located on the edge of the Chora peninsula just after the square with the statue of the Invisible Sailor. Built on the island that joins the mainland with an arched bridge, it was a fortified settlement and protected the entrance of the 2 bays. The arch in its current form was built after the war. It is surrounded by sea on 3 sides, offering natural fortifications from the enemies.

Its name, Kato Kastro, was obviously taken from the fact that the Castle of Faneromeni was called Pano Kastro. It was one of the most important castles in the Aegean. It remains today an important attraction of the island although it is largely destroyed. The ruins today bear little resemblance to the terrible loopholes, but the remnants of the wall can be seen.

The Kato Kastro and its history

After the Fall of Constantinople by the Franks in 1204, Andros fell to the Venetians. The first ruler of the island was Marinos Dandolos. The rule of the Venetians lasted 250 years. Fortifying the island, they built 3 castles. Dandolos builds in 1207 the Kato Kastro of Chora, where the rock mixes with the sea. To protect the inhabitants from pirates, they build the city inside the castle on the narrow peninsula between Paraportio and Nimborio.

A medieval settlement was created there inside the castle, knowing commercial and economic development. The settlement was developed in the part that is on the peninsula> The island was the citadel of the castle and the seat of the Venetian administration. The country even today still bears the traces of its time.