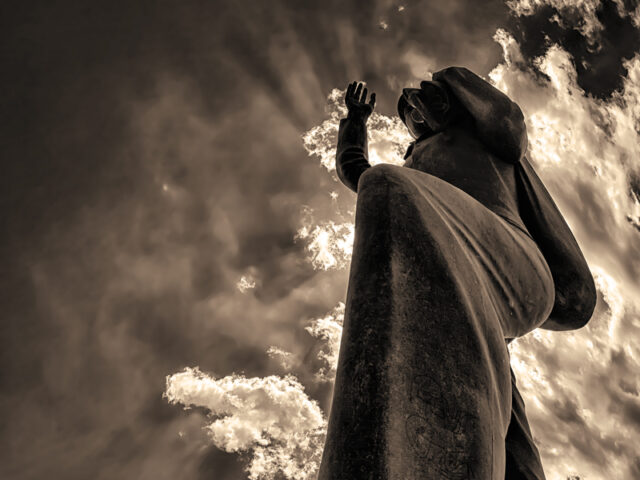 The Unknown Sailor is a trademark of Andros. A work by Michael Tombros, it has been standing since 1959 in the square of Riva, at the lower end of Chora, in honor of all the sailors who lost their lives at sea.

The square of the Unknown Sailor was once home to the mansions of the Emperors. During the bombardment of the Italian garrison of Andros during World War II, the mansions were razed to the ground and the area was given to the Municipality of Andros.

Unknown Sailor in Andros – Its creation

Years later and with plans by the architect L.D. Kriezis, the square is constructed in a way to host a monument of all the sailors who did not return. The square was completed in 1958. The Unknown Sailor was created by the sculptor with copper as the basic material and sponsored by the Goulandris family. It was placed on its pedestal on November 5, 1959, and was unveiled through celebrations and concerts at the Municipal Theatre. Performers from the Lyric Stage participated and the entire celebration was the subject of national news coverage.

The statue remained steadfast until April 30, 2001, when a strong wind blew it into the marble of the square. After necessary repairs, it was put back in place. It is a legendary statue, a visitor attraction, a landmark, a classic place of reminiscence, and a place of souvenir photos for all visitors to the island.

The Unknown Sailor is the symbol of Andros.