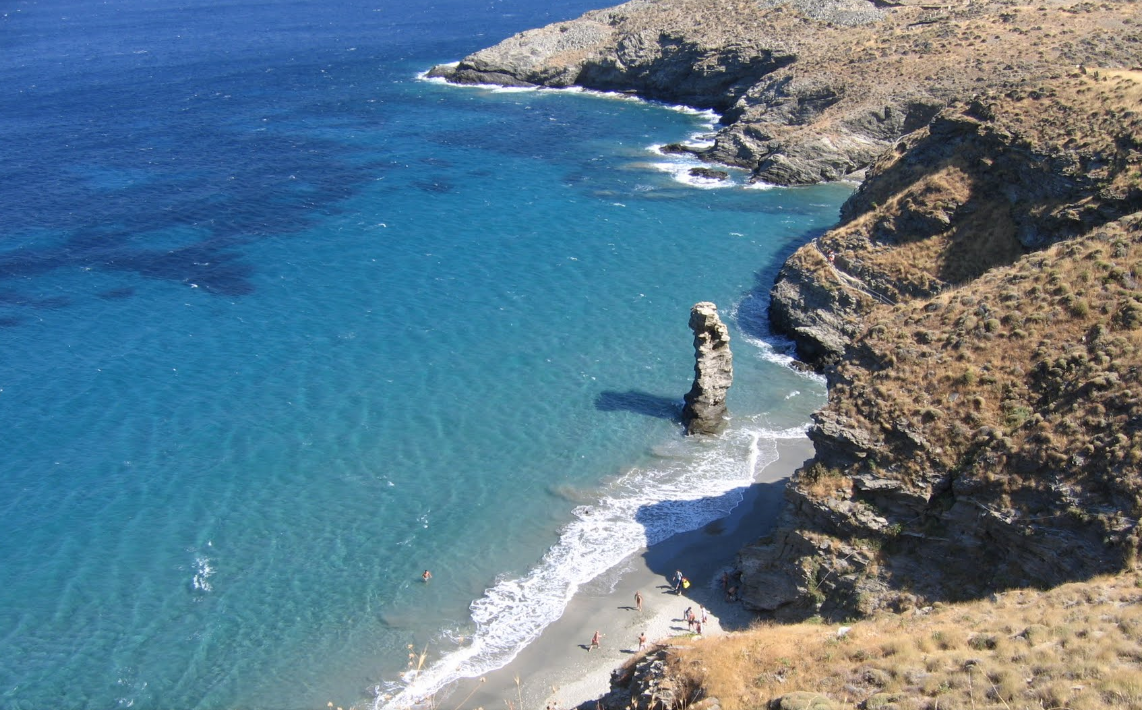 One of the most characteristic and popular beaches of Andros. The beach “tis Grias to Pidima” or else “The Old Lady’s Jump” it is located on the southeastern coast of the island and it gathers the interest of many tourists, not only for its unique sandy beach but also for its … strange name as well as the myth that it carries.

Location – How to get there?

The beach tis Grias to Pidima, it is located is located in southeastern Andros, very close to Korthi. It is about 38 km from the port of Gavrio and 23 km from the capital of Andros, Chora. Besides to its huge popularity – due to the characteristic large rock that rises, a few meters from the sand – the beach is considered to be quite scarce and inaccessible. The signs for the drivers are very helpful, but it is difficult for those who have not visited it before because of the peculiar route through the narrow alleyways of the Ormos Korthi bay and the morphology of the area (the sand is not visible from the height of the road, so you are likely to overtake it especially if there are no other parked vehicles at the point). It should also be emphasized that although the beach itself, with its turquoise crystal clear shallow waters, is ideal for families and kids, its approach is difficult since the height of the road includes a short descent of the slope following a path for about 5 minutes. More specifically, reaching the bay of Ormos Korthi and heading north, along the coastline, you reach the small Vindzi port. The beach is located east of the big bay of Ormos Korthi behind the chapel of Saint Catherine. At the intersection to the settlement of Rogos – where the temple of Panagia with the majestic roof – continue for a few more meters straight. Note that the last sections of your route include a dirt road quite good. The beach tis Grias to Pidima is on your right. It is only left to discover the path that will lead you to the famous beach. It is probably worth for the hiking lovers to choose the path from Gialos through Agia Ekaterini, cause the natural environment that separates the two bays is extremely beautiful.

Not a few, those who wonder how the famous beach – which has become a trademark of Andros – got this strange name. There is no definitive explanation, but we will mention here some versions of the myth leaving the reader to choose. The predominant story includes another well-known attraction of southern Andros called the Pano Kastro “the Upper Castle” or the Castle of Faneromeni or the tis Grias to Kastro “the Old Lady’s Castle”, located above the village of Kochilos. The castle is reached through a path from the village of Kochillos, there are many ruins of houses and temples as well as the small church of Faneromeni. What is worth it is the breathtaking view of the Aegean Sea and the imposing landscape of southern Andros, which gives you the climb on the Plateau of Kastro.

As easily understood, the Old Lady has given her name on two popular spots in the area. The Castle of Kochilos was the strongest medieval state of Andros. It was built on an impressive plateau north of the beach “tis Grias to Pidima” and has an altitude of 600m and was considered impregnable because of its high rocks that functioned as its natural protection and also its high wall.

During the Ottoman Empire, the legend says that the enemy was unable to conquer it, and thus evaded into fraudulent means. So, they sent to the Castle an old lady with her pregnant daughter to ask for help. When the night came, the old lady opened a gate and the Turks managed to enter and slaughter the inhabitants who had resorted to the castle for protection. Then the old lady, from her tremendous shame and regretting the evil she caused, she climbed to a tall rock and committed suicide by jumping into the sea. Where she fell, she became a stone. According to the locals, this rock on the beach, if viewed from a certain angle, looks like the profile of an elderly woman, with the scarf on her head. Another legend states that the Turks chased an old lady and she desperately climbed to that rock and preferred to commit suicide rather than fall into the hands of the conquerors. A third less popular version says that the old lady jumped out of the rock as she was third widowed. She did not endure loneliness and wanted to put an end to her life.