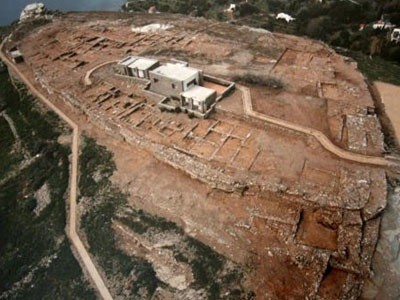 The great city of Ancient Andros

The ancient city of Ypsilis, in Aprovatos, was discovered in the early 1980s. The first excavations brought to light important ancient relics, such as the temple in the center of the acropolis, buildings and part of the wall, as well as many movable finds. The excavation gave important findings, valuable for the Geometric and Archaic period in the Cyclades and more widely in the Aegean.

The sanctuary, at the center of the Acropolis, probably dedicated to the goddess Demetra, was founded in the 8th century BC. and continued its operation at least until the second quarter of the 5th century BC.

Ypsili is one of the most important fortified settlements of the early Iron Age in the South Aegean, where a large part of the urban planning of the archaic phase of the acropolis and the fortification of the geometric era was recently revealed. Large farms of historical times came to light in the wider area of ​​Ypsilis. The formation and highlighting of all the archaeological site was included in the Regional Operational Program of the South Aegean and today it has become the first organized visiting archaeological site in Andros.