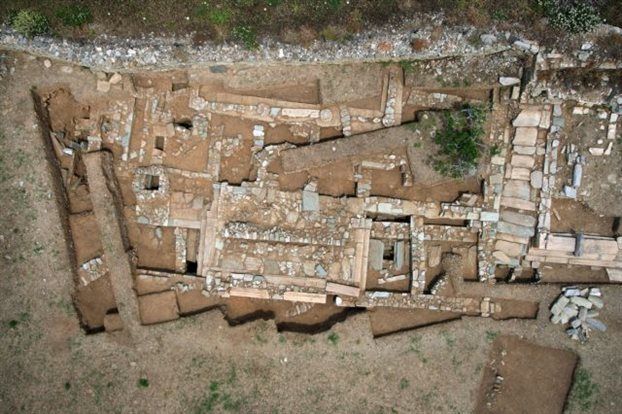 The Archaeological Site of Paleopolis in Andros was the ancient capital of the island and the only city on the island of the Classical period. It was founded in the 7th-6th century BC and flourished.

In the 4th century AD, was destroyed by an earthquake, and part of it sank into the sea. However, it was inhabited until the early Byzantine period. The wall is up to 3 meters in some places and the sanctuaries are preserved. Also preserved is a temple dedicated to Apollo of Pythia (late 6th century BC), who was worshipped as the main deity along with Dionysus in Andros, cemeteries, etc.

Archaeological Site of Paleopolis – The findings

Archaeological excavation has revealed the city of classical times with its market, sewage, and irrigation network. The most important thing discovered is that its inhabitants knew metalworking. Therefore they were able to exploit the mineral wealth. The archaeological site of Paleopolis during the excavation has also brought to light, houses from the early Christian centuries. Another finding is a three-aisled basilica, which is preserved in good condition up to three meters high. It is possible that the church was destroyed by the great earthquake of 552 in the Eastern Mediterranean when it was replaced by a smaller one.

In 2009, a mosaic floor was uncovered in the nave of the 5th-century basilica. The names of its two possessors were given: Euphrosyne and Maria. The Archaeological Site of Paleopolis is one of the most important archaeological sites in Andros.