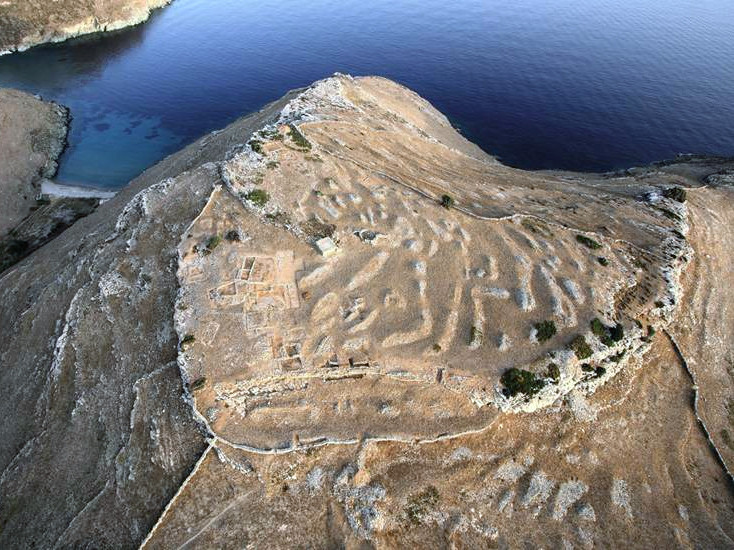 The oldest city in Europe

The archaeological site of Strofila in Andros is the largest settlement of the Modern Neolithic Age that was located in the Aegean Sea during the excavations by the KA’ Ephorate of Prehistoric and Classical Antiquities. With the recent excavations in the Cyclades, sets the Cycladic prehistory on completely new bases. The knowledge of the form and structures of important settlements of the Final Neolithic, the Early Cycladic and the Mesocycladic era is finally attained, while information on the Early Cycladic and Mesocyclic cemeteries is increased.

New elements come to light for the Late Cycladic facilities and Mycenaean Acropolis. The data of Cyclades historical times are also redefined, by the study of ancient cities, cemeteries, sanctuaries and farmhouses that were little or no known, as well as the new knowledge about mainly archaic art.

The settlement of the Final Neolithic period

Strofilas, the “ancient city of Europe” dates back to 4,500-3,300 BC. and came to light almost intact. The ruins of the unique in size and its preserved fortified and densely settlement, extending at a distance of 25-30 acres in the center of the plateau, on the west coast of the island.

Also, there are findings that testify that the metallurgy in the Cyclades, was in a more advanced stage, than the few findings we had from recent excavations in other islands. According to archaeologists, the excavation revealed “the largest and most preserved organized and extremely densely built settlement of the Neolithic Age of the Aegean islands that is being investigated to date.”

Particular findings of the settlement are the extensive repousse or carved rock paintings adorning the wall and the floor of the sanctuary as well as parts along the rocky wall with naturalistic representations (animals, fish and more than 60 ships) and symbolic (spirals, ring-shaped themes in the shape of Neolithic figurines).

The Strophila rock paintings are repousse or embossed. They were spotted on the wall of the Neolithic settlement, etc. by the archaeologist, Christina Televantou of KA’ Ephorate of Prehistoric and Classical Antiquities. As a result, Strofilas emerges as a highly interesting archaeological site – unprecedented in size and preservation for its time!

The ships are engraved at a height of 0.5-1m from the ground. 7 depictions of ships have been revealed: 4 are together as a procession, the rest are alone. The largest one (about 20cm in length), is embedded in the stone of the gate of the strong wall (perhaps 4m high – up to 2m high) – the oldest, so far, defensive architecture sample, with a gate protected by ramps.

In addition, out of the wall were found on a rock: 17 patterns, which represent deer, feline and a piglet, while within the settlement, on natural rock, have been discovered boats, a big fish and many decorative themes.

Strofilas, as well as its modern large settlement, which was pointed out at Agios Georgios Falatados in Tinos, show that already in the 4th millennium BC. developed societies in the northeastern Cyclades.

Andros: Te bridge between the Aegean and the Mainland of Greece

The geographical position of Andros, making it a natural bridge between the Aegean island and mainland Greece, combined with water, vegetation and arable land, seems to have favored the concentration of population and the development of the settlement that was identified. As revealed by its ruins, it belongs to the cultural horizon of Kefalas Keas, Αεgina and Attica in the Final Neolithic Period (4500-3300 BC) and presents “early urban structures”. Collective work which involving a similar social organization. Its fortification is the oldest documented example of defense architecture with a gate, 1.5 m wide, protected by precursor-shaped curved ramparts “as it is 2000 years older than the known early Cycladic fortifications in Kastri, Syros and Panormos, Naxos”.